In this post, you will learn about the wonderful movies about sex dolls. You will really feel the interpretation of these movie directors on the future development of the real doll and doll’s interaction with your life. If you have never watched this type of movie, you will be shocked at how normal the concept of real dolls in the film is!

Art comes from life. Although sex dolls may not be the main part of your life, all signs indicate that they will have a place in the future! 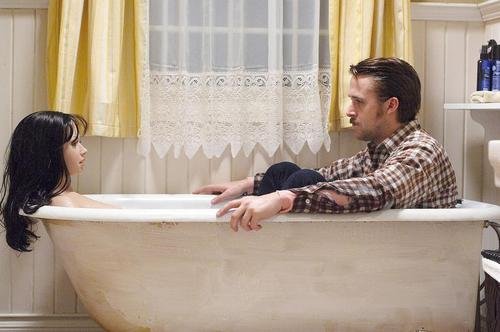 This film stars the extremely popular Ryan Gosling, which is one of the factors that make the film popular. This film tells a very touching story about the transmission of love.

Lars has a very miserable life. His mother died of postpartum complications when he was born, and his father became depressed. As a result, Lars becomes a patient of social phobia. He does poorly in communicating with his family, colleagues and church members. A colleague named Margo shows interest in Lars, but he only has a brief interaction and contact with her. Margo likes him and he likes her, but neither are any good at expressing their feelings. Lars is searching for that special someone and just like a lot of us. He lives alone in a converted garage. His brother’s wife Karin invites him to come home for dinner, but he refuses.

When an inflatable doll named Bianca comes into his life, his world changes. He begins to find comfort and companionship. What is more touching is that he treats her as a human being and establishes a unique relationship with her. A young, terminally shy young man named Kenneth is working for a Major Computer Company. His life is about to change, when his boss offers him a big bonus if he could make the changes of a complicated computer system. Kenneth usually works alone but his boss makes him work with a young attractive woman named Lisa.

Once he receives the sex doll Nikki, Kenneth makes the doll dress like Lisa and almost having a realistic romantic relationship with his doll. The one morning, Kenneth is completely changed and he can’t tell from reality. Thinking that Nikki is alive in his mind. Kenneth has to find out, what is best for him. Is his sex doll Nikki or his attractive co-worker Lisa. Love Object shows what happens when obsession becomes reality. Alex and Claire are living a boring and tedious life after years of marriage. They do not communicate to each other anymore, and Alex is almost speechless at home and without motivation and inspiration in his work as a former successful photographer. When Claire decides to leave him to live with her sculptor teacher, Alex He felt down in the dumps. One day, he orders an expensive and desirable sex molded doll called Monique, and his life changes completely. Alex falls in love with Monique, making all his fantasies come true.

In this film about the middle-aged crisis and how everyone overcomes the ups and downs of life, Monique shows how to overcome social norms and meet our basic needs. Monique shows a journey of spiritual companionship.